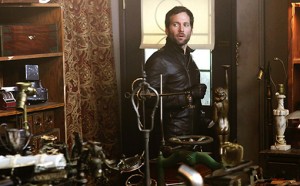 ONCE UPON A TIME – « The Return » – Mr. Gold attempts to uncover the true identity of August, Emma confronts Regina about her involvement in Kathryn’s disappearance, and David tries to apologize and reconcile with Mary Margaret. Meanwhile, in the fairytale land that was, Rumplestiltskin agrees to comply and do whatever it takes if his son can find a way for him to safely give up his powers and turn back into the loving man he used to be, on « Once Upon a Time, » SUNDAY, APRIL 22 (8:00-9:01 p.m., ET) on the ABC Television Network. (Photo by Jack Rowand/ABC via Getty Images)
EION BAILEY