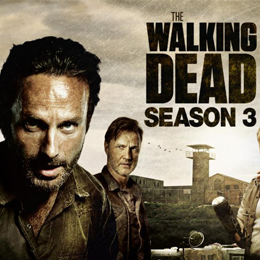 The Hollywood Reporter: What was behind the decision to kill off Lori ?

Glen Mazzara: We did think it would be interesting if like in the comics Lori was killed in the strife between the prison and Woodbury and that is a storyline we’re developing. The decision to move up Lori’s death was to make sure that Rick was suffering as much as possible, that Rick was at his breaking point, at the exact moment that his most formidable foe was coming right for him. The Rick at the end of episode two can take on the Governor but the Rick of end of episode four is a broken man. Now everything is up in the air and anything could happen when the two groups meet. That was the catalyst for the decision: Lori’s death and the affects on Rick and the rest of the group would be a devastating loss.
Robert Kirkman: That was something we were always planning on building to. It’s very important in the comic series that Rick loses his wife after everything he’s tried to do; it’s unavoidable and that informs his character moving forward. That’s something we wanted to adapt and as we started plotting season three out, we came in wanting to make the show as intense as possible and hit the ground running and pack as much stuff into each episode as we possibly could. As we were plotting things, that storyline kept moving closer and closer to the beginning of the season. The first four episodes of this season, every one of them could have been a finale of any other show but they’re just another episode for us. We wanted to spend a lot of time with Carl and Rick in the aftermath of that. As the season progresses, you’ll see just how important Lori was to the show and how much of a loss that’s going to end up being.

Lori and the baby don’t make it out of the Governor’s assault on the prison. Was skipping that seminal moment disappointing ?

Mazzara: We discussed it for a long time and we’re always looking forward to playing with audience expectations but we felt that the events in episode four and beyond were as really as gut wrenching as possible.
Kirkman: I don’t think by losing that event we’re radically altering the confrontation between Rick and the Governor and the clash between the people in the prison and the people of Woodbury. We’re definitely building to some pretty climatic stuff. That one element has been taken off the table and as the season progresses people will understand why we made that decision.

How will Rick’s decision to lock Andrew outside haunt him now that Lori’s gone ?

Mazzara: It will haunt him and he’ll have to wrestle with that. He believed he was committing an act of murder to save the group and that murder led to deaths within his own group and forced his own son to put down his mother. What a horrible set of consequences. It’s going to break Rick. It has to break him. Who could possibly suffer that? You see Rick at the end of episode four, he’s a broken man and how do you possibly get him back together again when the Governor is coming? We showed a c-section without anesthesia in a boiler room, which is one of my favorite sets ever and we’ve been saving that set to showcase for this scene. Then we have a boy having to put down his own mother, this is a very fearless storytelling on the part of all the writers, producers, cast and crew. We’re fortunate that we can follow Robert’s book and yet are free enough to create some pretty cutting edge drama.
Kirkman: That’s a big part of what’s coming up. Rick has taken this leadership role and tried to make the best possible decisions moving forward. He got them through the winter and has definitely has a number of wins under his belt but despite his best intentions, he has made a few decisions that have resulted in other people’s deaths. That’s something that’s going to weigh on him. It’s extremely interesting to know there’s this big clash on horizon between Rick and the Governor and that would have gone down a certain way at the beginning of this season but now we’ve got Rick in a very different head space and he’s going to be dealing with a lot of things. It’s the absolute worst time to really need to count on that guy and it’s going to lead to some pretty interesting stories moving forward.

More from my site